Experience more with so much included

First we explore the tiny villages of ‘old’ Holland from where ships of the 16th century Dutch East India Company set sail in search of silks and spices. Then it’s off to Arnhem scene of the famous battle in 1944 before visiting Antwerp, the city of Diamonds and Rubens with its main square lined by the tall step-gabled, merchant’s houses so typical of the ‘low’ countries. Then we explore the very best of Flanders in delightfully medieval Ghent. From here we see Ypres and one of Europe’s finest ‘old world’ cities, delightful Bruges. Listen to the sound of the carillion emanating wonderfully from the instantly recognisable Bell Tower, sip a coffee in the old market square and reflect on how wonderful life can be. Finally we discover one of nature’s most spectacular of floral displays, the kaleidoscope of color that is the Dutch Bulbfields. 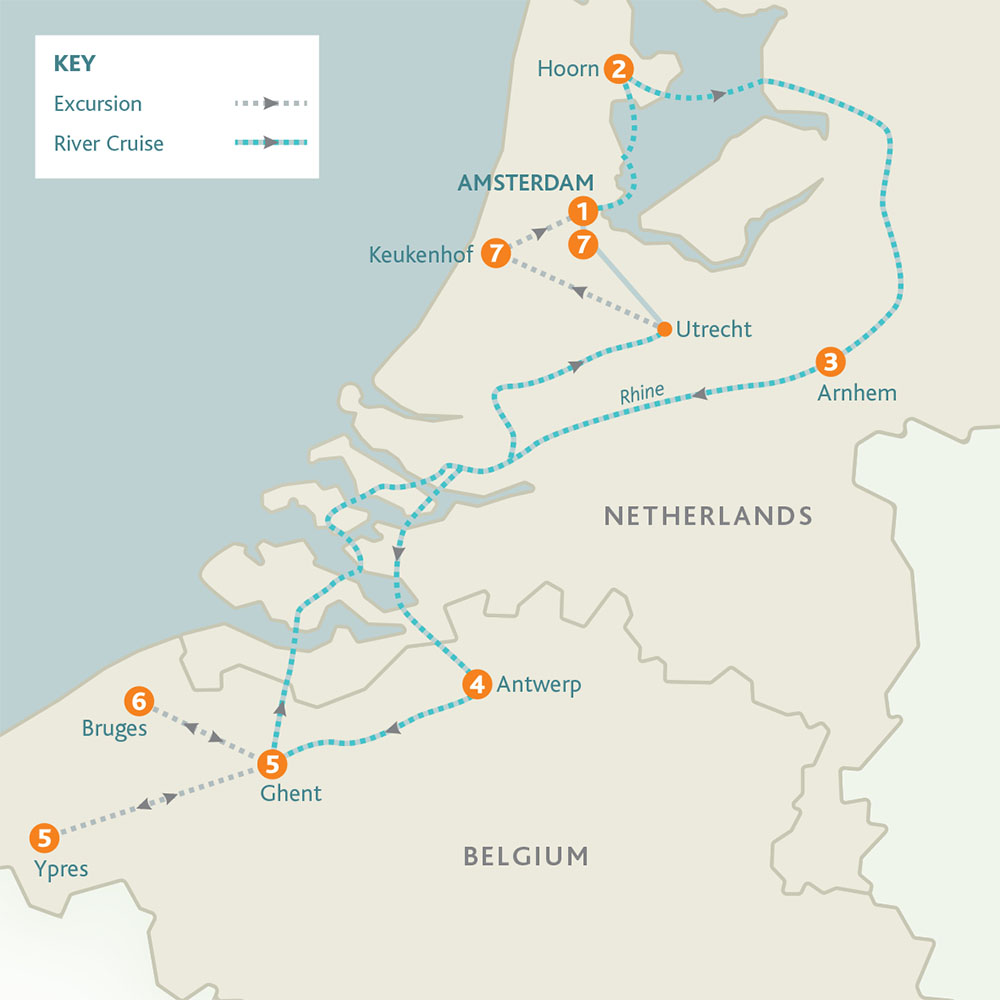 Breakfast is an on-board institution and you’re always assured of an enticing range of choices. We’re moored in the heart of delightful Amsterdam, and there’s no better way to explore than taking a classic glass-topped boat tour through the network of canals that infuse every aspect of life here. The tour brings a real insight into the history and everyday life of Amsterdam, a maritime, financial and cultural powerhouse uniquely located facing both the sea and the heartlands of Europe. As we glide over the calm canal waters, you’ll see a fascinating variety of typically Dutch narrow gabled buildings, bustling streets and historic bridges immortalised by the great artists, and learn about its famous canalside residents, from the tragic Anne Frank, who wrote her diaries hidden in a merchant’s house, to Rembrandt, the Dutch Old Master.

A splendid buffet lunch awaits our return as we slip away from the quayside towards the IJsselmeer, the enormous inland lake created when the Zuiderzee was cut off from the North Sea by a series of dykes and dams. Our port of call is Hoorn, once a prosperous port of the Dutch East India Company. Reminiscent of another age, it’s a charming mix of imposing buildings dating from the 15th century onwards, brick-built warehouses, cobbled squares, and twisting alleys. Hoorn’s ships traded the world over, with one sailor even naming the southern tip of South America after his home town – Cape Horn. There’s time to explore this intriguing spot and its boat-filled harbor, dominated by the distinctive 16th-century Head Tower, before returning to our cruise ship to enjoy dinner and maybe a nightcap in the lounge. 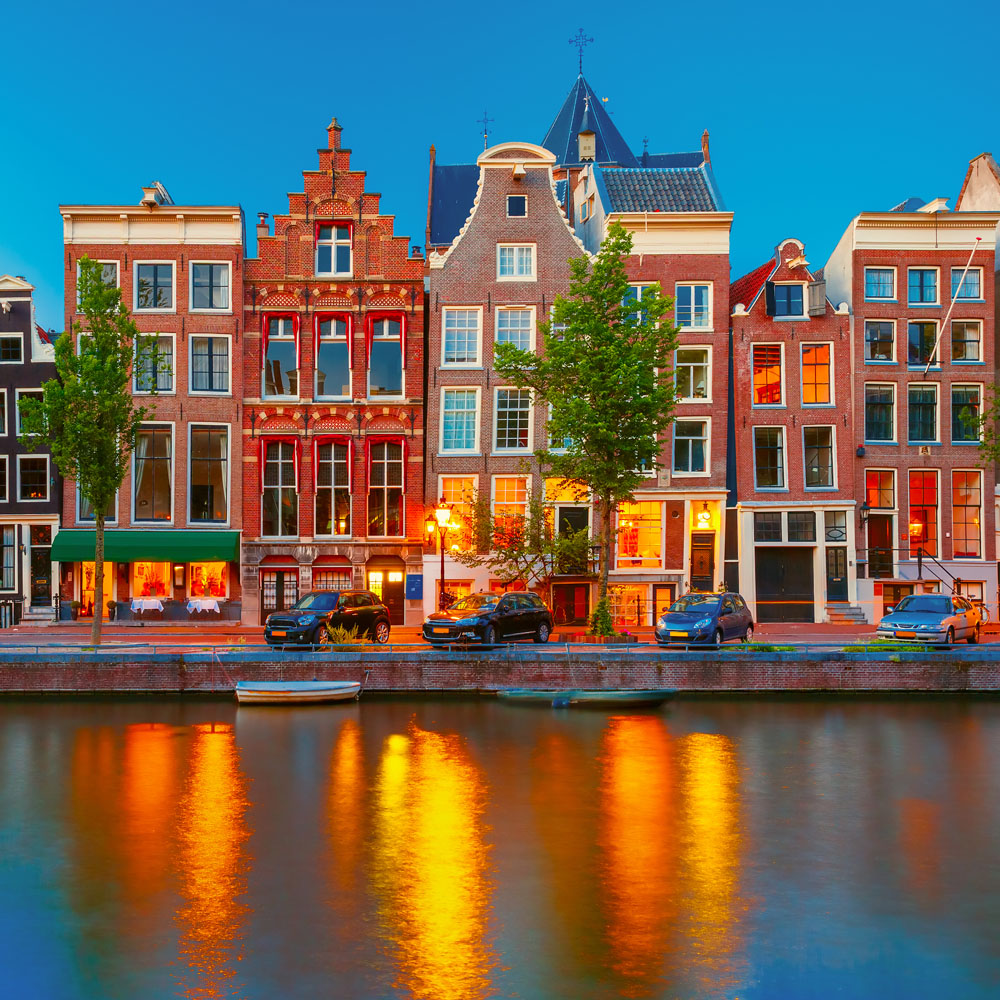 One of the delights of river cruising is the enchanting experience of waking somewhere new, the water gently lapping as the ship glides almost imperceptibly along. We’re now deep in the heart of Holland, passing flower-bedecked houseboats, flocks of wildfowl and, of course, windmills! We soon arrive in Arnhem, synonymous with the ill-fated 1944 aerial assault depicted in the film A Bridge Too Far. We visit the battle HQ of the British 1st Airborne Division at Oosterbeek, now an excellent museum, and the Commonwealth War Cemetery, the final resting place of so many. Back on board, we continue our passage along the mighty River Rhine, one of Europe’s most important arterial waterways, before enjoying another sumptuous dinner on board, as distant lights glint on the waterfront as we silently slip by. 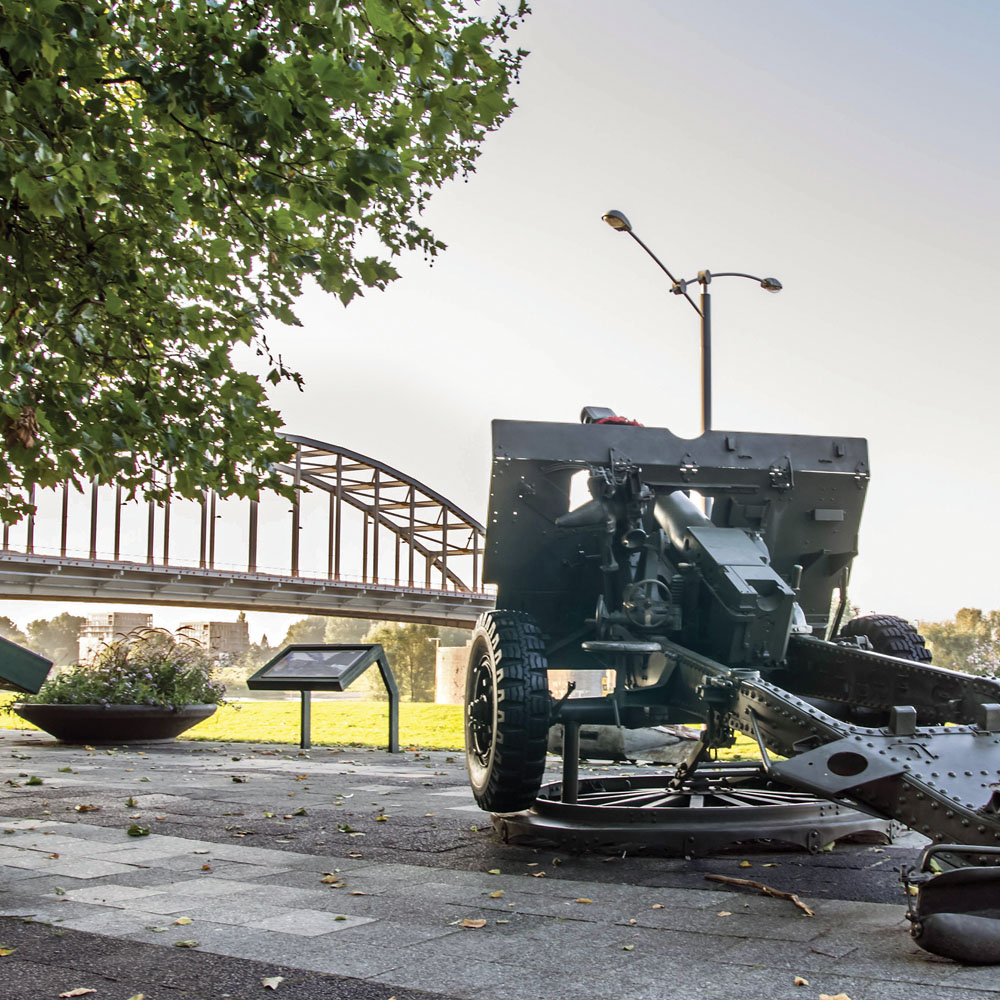 This morning there’s a chance to marvel at the Captain’s skill as he calmly navigates the busy River Scheldt and moors in Antwerp, birthplace of the Baroque master Peter Paul Rubens. This morning we enjoy a tour led by a local guide taking in its numerous highlights and lesser-known features. Once part of the Spanish Empire, Antwerp grew wealthy during its 16th-century Golden Age, when it was Europe’s largest port north of the Alps, with profits invested in the city’s Flemish art and architectural heritage, and later it became the world’s diamond trading center. At its heart is the captivating main square – the Grote Markt – dominated by ornately gabled guildhouses, the Renaissance town hall, and opulent Brabo Fountain.

This afternoon is free to explore as you wish, perhaps visiting Rubens’ extravagant former home and studio, the magnificent Gothic cathedral or even the painstakingly restored train station, of such architectural splendor it is often called the ‘Railway Cathedral’. 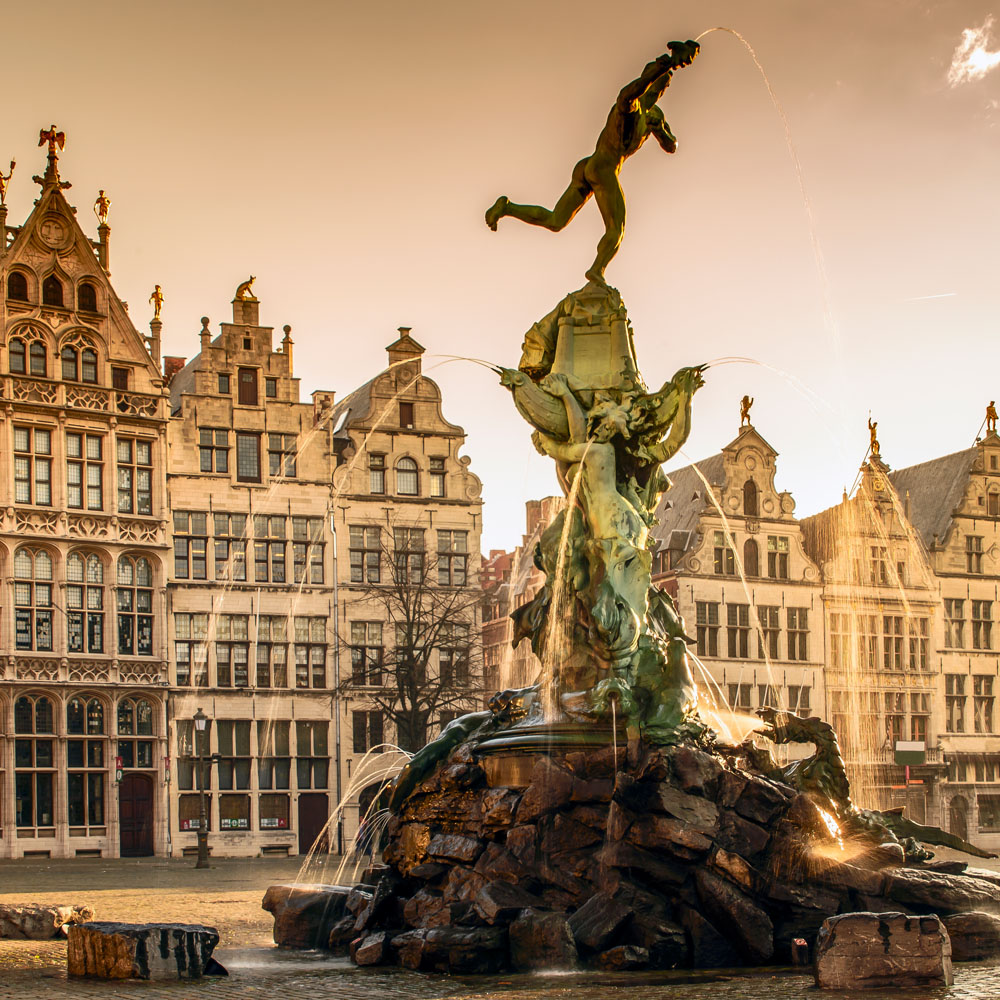 Today we awake in picturesque Ghent, once Western Europe’s second-largest city after Paris. Fortunate to escape the ravages of the 20th century and often overlooked by tourists, Ghent is a medieval gem we explore in the company of an experienced guide. Highlights include a gorgeously unspoiled waterfront, the 13th-century skyline punctured by soaring belfries, the 12th-century Gravenstein fortress towering above the river, and one of the world’s foremost art treasures – the van Eyck brothers’ Adoration of the Mystic Lamb, the altarpiece adorning Saint Bavo’s Cathedral.

After lunch on board, there’s the option to spend the afternoon in Ghent, maybe taking a horse-drawn carriage ride or finding a cozy spot in a quintessential Flemish café.

Alternatively, you can join our tour to Ypres, a name synonymous with the horrors of the Great War. Almost totally destroyed during a series of battles, Ypres is now a place of peace, reverence and reflection. You may wish to visit the award-winning In Flanders Fields Museum that tells the haunting story of the conflict, providing a thought-provoking insight into the extraordinary lives of the soldiers and civilians; it’s located in the Cloth Hall in the heart of Ypres’ beautifully restored town center. Nearby are many battlefields synonymous with the horrors of trench warfare, including Passchendaele, where around 600,000 perished. In addition, we visit Tyne Cot, the largest Commonwealth war cemetery in the world. Ypres is also the home of the Menin Gate, the deeply moving memorial to the missing where the ‘Last Post’ is played every evening. 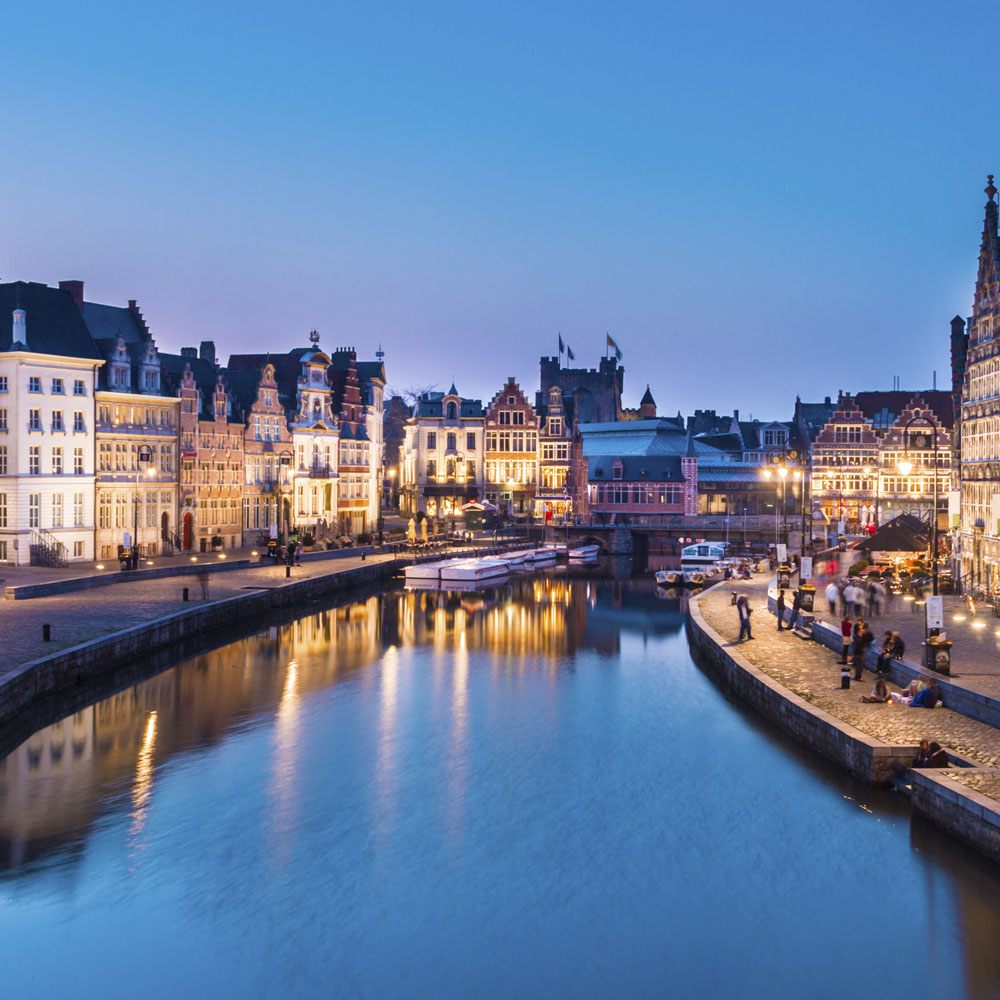 After breakfast we take the short drive to Bruges and have a guided walk of this beautiful town, which really does carry its remarkable medieval legacy with charm and to perfection. The atmosphere here is pure romance and its streets are crammed with fascination. Exquisitely compact, its entire historic centre is a UNESCO World Heritage Site made up of serene canals, narrow cobbled streets, romantic gabled houses, exquisite churches and myriad shops selling artisan goods – including its legendary chocolate! Its main square is dominated by the soaring Belfry, whose 47 bells chime to create an idyllic atmosphere. It’s a 366-step climb to the top, but the breathtaking views are well worth it. You’ll also see the City Hall and the Basilica of the Holy Blood, home to a venerated relic – a phial of Jesus’s blood reputedly brought back from the Crusades. Another must is the Church of Our Lady, where you can see Michelangelo’s Madonna and Child, a work of incomparable beauty carved in white Carrara marble. You’ll be reluctant to leave this enchanting place, although the promise of more first-class dining in the ship’s restaurant will lure you back. 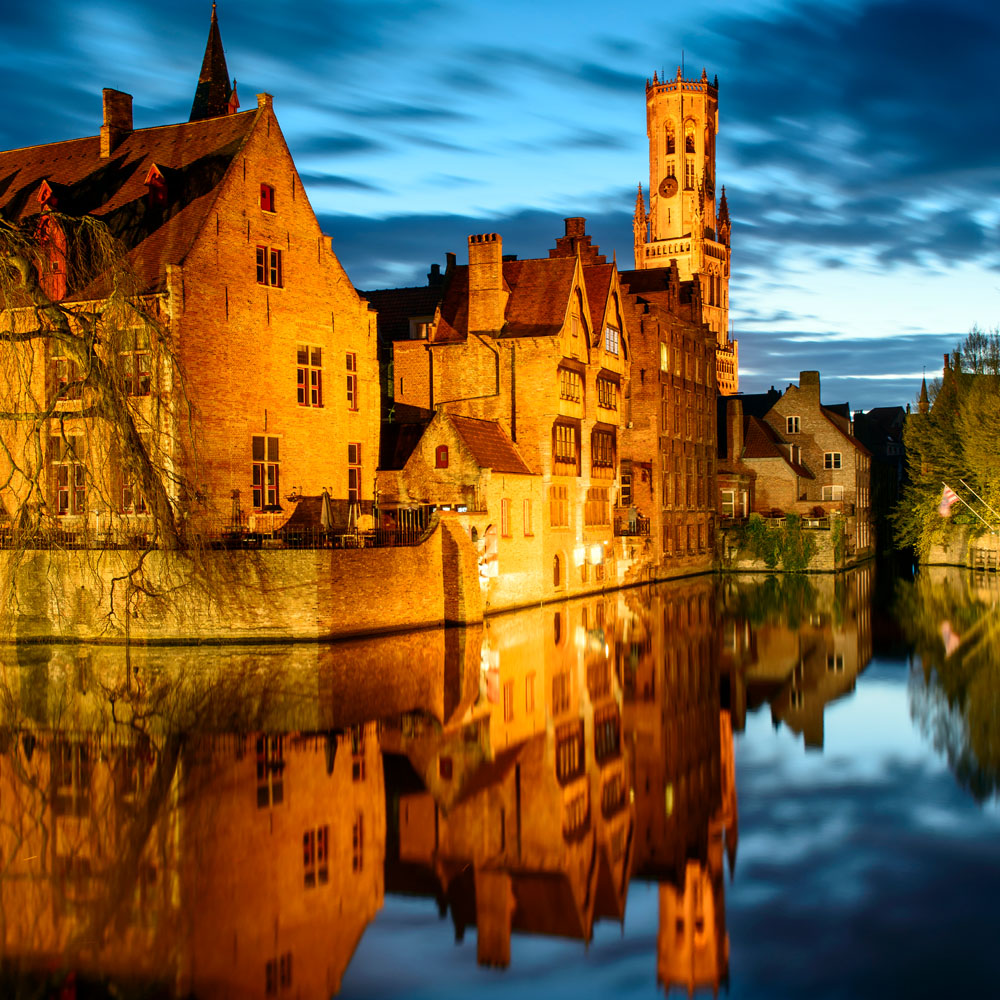 Early risers discover the ship making effortless progress along the delightful waterways and you experience the somewhat surreal effect of cruising above the surrounding reclaimed polders – it’s almost like flying! Today we visit Keukenhof, the heart of the glorious Dutch bulbfields. On arrival, nothing prepares you for the dazzling spectrum of colors stretched out before you in the world’s largest flower garden, covering nearly 80 acres. The art of flower planting reaches breathtaking heights at Keukenhof, a gardener’s heaven created by more than seven million tulips, daffodils and other blooms set among a beautiful landscape of shimmering lakes, ancient trees, flowering shrubs, and water gardens.

We re-join our ship in Amsterdam and after lunch you’re free to explore as you wish. Amsterdam is an art-lover’s dream. The Rijksmuseum is an architectural marvel itself, but it holds a magnificent collection of works by Dutch masters such as Rembrandt and Vermeer, while admirers of Post-Impressionism might prefer the Van Gogh Museum, housing the world’s greatest collection of works by this genius of a man. Or relax in a pavement café, absorbing Amsterdam’s special atmosphere over a rich Dutch coffee, browse the many shops or perhaps just stay on board to catch up on some reading. Tonight there’s another culinary highlight – the Captain’s Dinner, when the chef prepares his superb ‘signature’ dishes for you to enjoy in the splendid surroundings of the ship’s restaurant, with a chance to reflect on the fascinating places you have discovered, poignant stories you have heard and the new friends you have made. 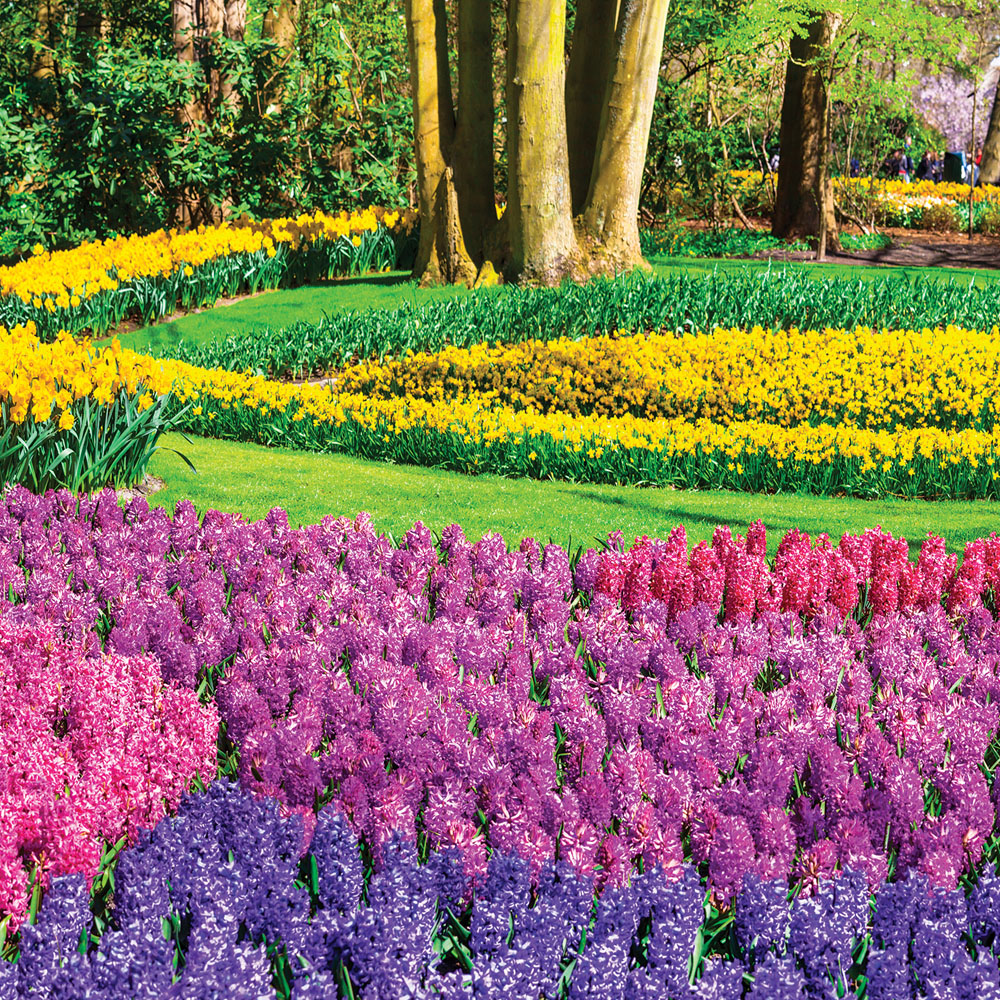 After breakfast this morning your friendly crew bid you farewell before you disembark.

Prices are per person, based on two people sharing a twin cabin with a limited number of single cabins available on all decks, at the relevant supplement. The price includes:

Your Choice of Drinks

While we include everything you might need in our prices, we never charge for something you might not. If you prefer to pre-order your drinks, you can purchase our drinks package which offers superb value and includes a selection of drinks during lunch and dinner.

Simply relax and when it’s time to dine in the restaurant, take your pick from a range of: draught beer; non-alcoholic beer; soft drinks; juices; red, white and rosé house wines; and wine recommendations from the menu by the glass.

If you choose not to purchase a drinks package, there is a vast selection of drinks on board each ship available for individual purchase. To see an example bar list please see our dining information.

Drinks packages must be purchased by all guests in the same cabin or suite, and do not include drinks from the bar. To book the drinks package please call the reservations team.

Unfortunately we are unable to process your request online at this time. Please call one of our specialist advisors on 888-838-8820 (lines are open between 9 am to 7 pm EST) or email us on info@rivierarivercruises.com for assistance.